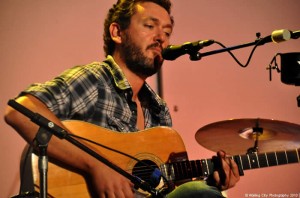 For the 3rd season of the webisode series ‘Sid’s View’, the Vault Productions team will once again team up with local singer/songwriter/musician John Fries.  The single ‘Traveling Home’ was written & performed Fries and will be used as the new theme song for this season’s webisodes.  ‘Traveling Home’ replaces the bass-groove instrumental used as the theme song the previous two seasons which was also performed by Fries.

John Fries is a local musician based out of Waterford, CT who has travelled throughout the country playing his original blues-based music.  He has released two EP’s over the years with many of his recordings available on itunes.  You can learn more about John, his band, his music and his touring schedule on the web at www.johnfriesmusic.com.