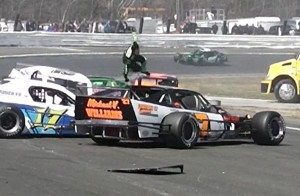 Vault Productions has compiled the most watched episodes from the 2013 season.  Their series ‘Sid’s View’ was filmed primarily at the Waterford Speedbowl and shot from a fan’s perspective on race day throughout the season.  2013 was the 4th season of the series and the first shot entirely in hi-definition.  There was also a new graphics package introduce to enhance the production quality of the series