So it’s been 5 days since my last rant and it feels like I posted that a couple of weeks ago.  I mean, this is just outta control.  I’ve said numerous times to myself and to others in the last week “is this really happening right now?  I just can’t believe this is actually happening!”  I’m trying really hard to be patient and hope for the best, but man is that tough to do these days.  One day I go to bed somewhat optimistic, the next totally depressed.  I refrained from making numerous replies on social media in the last 24 hours and instead I wrote this…. so, here are some of my thoughts on the most recent developments in this unbelievable Speedbowl saga.

NASCAR removing their sanction from the Speedbowl was inevitable.  While it is sad news, I’d hardly call it shocking.  I hate to say it, but the deep passion we have for the Speedbowl is not shared by NASCAR or the people who made this decision and IMO that’s always been the case.  NASCAR is a billion dollar empire and some disturbing story from a little track in CT is not worth any effort other than to cut ties immediately & avoid any more bad press with the NASCAR name attached to it, or even worse, have sponsors threaten to pull out.  That’s how big business works, especially big sports business.  The most important thing for NASCAR’s business is to protect it’s brand, and all of our hearts breaking over the Speedbowl right now would never change that.  That sounds harsh, but it’s true.  Understanding that beforehand, at least for me, helped ease the pain of the news today.  It was expected and actually took longer than I thought it would.  The Speedbowl has operated WITHOUT a NASCAR sanction for 46 of it’s 66 year history, it’s not the end of the world.

Top officials all resigning together a couple of days ago was also sad to read.  I guess if they all decided to leave, I’d rather get the news all at once than have it trickle out day by day.  Aren’t we going through enough torture already.  Most of those people have dedicated more than 20 years (if not their entire lives) to the Speedbowl and it couldn’t have been an easy decision.  I’ve gotten to know all of them over the years and still believe they genuinely love the place as much as I do.  I respect all of their decisions regardless of how it effects the 2017 season. 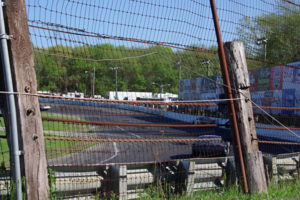 So the question remains, like I typed last time…. what do we do now?   NASCAR’s gone, INEX sanction also gone, the officiating team is gone.  Yet all we want is the track owner gone, and he’s still the owner.  Things won’t get better as long as that’s the case.   Which brings me to something I thought about mentioning last time, but refrained from typing it out then.  I think it’s more necessary now, so here goes:

The Speedbowl is not yours, it’s not ours, it’s not the racing community’s…. the Speedbowl is the owner’s.  He bought it, he owns it, it’s his.  Yes, our affection for the place is immeasurable.  Yes, many family histories goes back well before the current owner, or the owner before him, or the one before him.   One of the things that makes the Speedbowl so wonderful is that there are numerous families whose support for the place goes back to when the track first opened in 1951.  We are a passionate community and when things go wrong, we hurt.  I bet a lot of us feel like we’re hurting more about the track’s future than the owner is right now and if that’s your perception, I totally understand how that would bother you.  It’s only natural to feel we have some sort of entitlement to be treated fairly in this situation, just like we did during the foreclosure situation.   Why should we be punished for this?  Why should we lose something when we, the Speedbowl community, did nothing wrong.  I totally understand that – trust me, I feel it myself.  But, we suffer because it’s not our Speedbowl… it’s the owner’s.  Those are just facts.  And since the owner’s been accused of a committing a crime, it’s a legal matter now.  The bottom line is, while our hearts may disagree, the Speedbowl isn’t ours and we all have little say in serious matters like this.

I’m going to go out on a limb and speak for most of us when I say it’s beyond disappointing to hear so little publicly from the current Speedbowl staff on what’s going on.  I think Tom Fox even mentioned that in his quotes as one of the reasons why he resigned from his Race Director position.  In situations like this, silence is the worst approach.  I also try to be sensitive to the fact that the people left to try and keep the place afloat are in an impossible position.  I seriously would not want to be in Scott Gregory’s shoes right now.  The race teams deserve answers though, some sort of update.  This is too expensive of a hobby and too time-consuming to support the Speedbowl for them to not give information on what’s going on.  Something… I’d take a “we’re working on this diligently and hope to have updates for everyone soon”   Anything…. anything but silence, because the silence is deafening… and somewhat hurtful.   I feel for all the teams left wondering so close to the scheduled opening day. 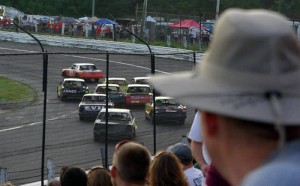 I think the most important thing we can remember is that the track not opening for 2017 isn’t the end of the world.  Losing a NASCAR sanction isn’t either.  Nor is the staff resigning.  All those things can be reversed.  You know what can’t be reversed…. if the track is sold to someone who uses the property for something other than a racetrack.  Once that happens, a race track in the town of Waterford will NEVER happen again.  So until something like that happens, there is ALWAYS hope!

If the track didn’t open until June, or didn’t open until 2018, would it be that bad?  Emotionally yes, until the gates open again, it would seem unbearable.  If that happened, I’d truly feel terrible for all the Speedbowl teams who spent money on their race cars this off-season, especially for those who wouldn’t be able to compete at other tracks because their own schedule or budget wouldn’t allow.  But in the grand scheme of things, the track being dormant isn’t the end of racing at the ‘bowl.  I really get bothered by all these “RIP Speedbowl” things I’ve been seeing around social media lately.  Yes today sucks, the last week has royally sucked the big one, but over-blowing things like it’s the end of the Speedbowl, well I just don’t think we’re there and hope we never are.

Another thing to remember is this:  There were only 4 people registered to bid at the foreclosure auction in October 2014, and all 4 of them were from the racing community.  And only 2 of them actually made a bid.  Despite all the Fed Ex distribution centers type scenarios that filled the rumor mill back then, not a single non-racing entity showed any interest in an opportunity to get a piece of property in a prime location at a really good price.  I try to remember that and still hope the most interest in the place is from within the racing community.  And of course, that the owner will actually sell it to someone else who’ll keep it a racetrack, remove himself from our playground and let this all be over with.

I ended my last rant with a hope that everyone would be respectful to each other in the racing community.  Unfortunately I’ve seen too much bickering on social media to know it fell on a lot of deaf ears.  I will just never understand that.  In a time when we are all collectively hurting, why do people want to argue about how we should feel, what we should do, what the owner should do, what NASCAR should do, etc.  I know it’s hard to sit and wait, especially when the Speedbowl team has basically remained silent.  It’s all so frustrating.  I just don’t know how arguing about it with others in the community actually helps anything.

Even as the track’s historian, I’m not ready to start preparing a eulogy.  I haven’t cued up R.E.M.’s “It’s the End of the World As We Know It” just yet.  Despite all the bad news lately, I actually don’t think we’re in dire straits here.  This season may be in serious jeopardy, but I don’t think the track’s ultimate survival is.  Maybe there will be a miracle and somehow, someway there will be a 2017 season at the Speedbowl.  To me, unless the Speedbowl is bought by a non-racing entity, I’ll always have hope.

Amazing place this Speedbowl.  It’s endurance through so much adversity was already incredible.  Let’s hope this is just another chapter, with many more to be written…

Please do your best to stay positive!!