…so the other day I had to make a few pick up/deliveries out on the road. I stopped at this one joint that was one of those 4-suites-in-the-same-building set up……. Read more »

Well… Mother Nature made up for all the rain with a beautiful weekend at the Finale. I’ve been holding it in for a month… so heads up!! Saturday was entertaining…. Read more »

Well, since we sucked again and Brian summed up the night pretty well, I thought maybe I’d give ya a different take on this past week… For the first time… Read more »

Aw man, am I chompin’ at the bit over here!!! Let’s get it started already!!!! Actually thought I had a good bite on the upcoming season reading press releases now… Read more »

Well…at least it was better than the ESPN movie on Pete Rose.   You guys seem to like it better than I did. But from my years in college studying television… Read more »

Ah yes, the grand Finale!! What a season!! I got all kinds of stuff so let’s get on it…. Saturday was pretty cool. The X-cars shows are fun to watch…. Read more »

OH MAN, what a weekend of events!!! Here’s just another view from the stands: PRO 4’s & TRUCKS…it’d be nice if the feature car counts were bigger than most saturday… Read more » 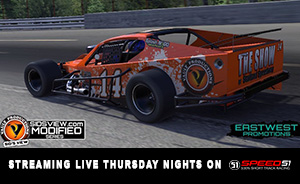