A look back at the final Saturday night SK Modified event at the Waterford Speedbowl on October 1, 2011, won by Keith Rocco – his record 12th win of the year – who also clinched his 2nd consecutive Track Championship. Also includes in-car footage from 3 cameras inside Tom Abele Jr’s #32 car and an in-race interview between Abele & track announcer Matt Buckler during the second caution period. 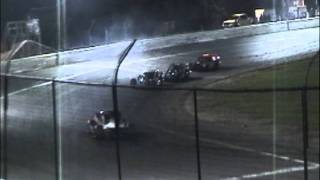